Home » » Dog Blog » do dogs know what we are thinking?

Does your dog know what you’re thinking ? Ask many a pet parent they’ll say absolutely. Now if only they knew what their dog was thinking. 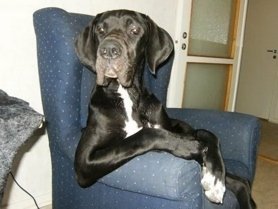 Research and the whole science of dog thought has actually become a formal area of study in recent years. Finally! Scientists have long studied dolphins, chimpanzees even mice in much greater detail than they ever did dogs. Is it because they lived side by side with us, and they didn’t want to in case they discovered dogs didn’t like the arrangement? Many dog behaviorist criticize pet parents for anthropomorphizing their dogs. Yet if it wasn’t for this ability to become one of the family and share the family home, what would be the point? I really don’t think we need to worry, it’s been probably 15,000 years since our dogs ancestors chose to join us.

Mankind has long known that a great number of animals exhibit shared characteristics with humans. We all heard the news blurbs recently telling us that dolphins can remember each other’s signature whistles (which function like names) for decades. Chimpanzees learn from others including humans and apply that knowledge to improved tool making. Elephants co-operate on tasks, showing evidence of deliberate thought and teamwork. Some animals can follow human pointing, including chimpanzees and in at least one study, some adult cats did the same. But, according to the study conductors, none of the other species are nearly as successful at it as dogs. It takes human infants about nine months to follow gestures, where as puppies from 6-9 weeks can accomplish this.

Yet with all that knowledge of “other” animals, we are looking at dog cognition and thought as a new area of study. One of the reasons for the delayed interest in this area of study could indeed be the changing role of dogs in our lives. 30 years ago, most dogs in North America would not have shared the actual family house let alone bedrooms with their humans. Now, the majority of canine guests at our pet hotel share the bed with their pet parents. One then has to consider the variance between breeds. The American Kennel Club recognizes 177 distinct breeds. How they have developed undoubtedly has a great deal to do with their view of their world. Regardless of where your dog now lives, if they are a collie they were bred to herd and those instincts will colour their view of the world compared to a beagle who lives with their nose to the ground.

The debate currently rages on with quite a lot of sound scientific study indicating that dogs have developed their own cognitive skills to understand what humans are thinking. Separating this development from bred skills and characteristics remains the future challenge of researchers.

For now, us dog behaviorists, trainers, and Pet Parents can use this emerging knowledge to confirm some of our existing teaching techniques and develop new methods to ensure we and our pets are moving towards a common language.

Help the science of dog cognition whilst having fun, visit an interactive website to learn more.

Jenn Dahinten had been involved in health and pet care for over 20 years and is currently a part of the caring team at The Royal Pets Hotel & Spa, a 5 star Pet Hotel just north of Toronto in Barrie, Ontario.